October last year was really beautiful, weather hold for quite some time. I managed to tick one route from my list with Sebastian, Niederman on Grosse Bielenhorn. I was telling Masha in August when she was sad that the summer is about to end, that it’s going to be good, and we can most probably still climb in October. Well I did. I went with Andrew – Masha’s friend. Got to tick one more route from my list on Grosse Bielenhorn. We settled to go and climb “Curiosity”.

Since it was my first time climbing with Doug, I wanted to play it safe and we left relatively early, it was also his first outdoor climb after Masha’s accident. We left around 5am from ZRH, assuming the drive it’s gonna take around 2h. For some reason I thought the sun rises earlier. Most of the way I kept wondering whether it decided not to rise anymore… but it did, at least one thing that you can count on. When we parked it was still darkish, to the point that we had to use headlamps when we started the approach.

First two pitches were really cold since we were still in the shade (who wanted to start that early, really?). Afterwards it got much warmer, we swang leads and moved reasonably fast. The route is really good. Rappel goes over “Fandango” that I’m adding to my list for next year. First abseils for Doug were uneasy. For me, it was normal… but first time ever I clipped belay device in a wrong way, I mean I clipped only through one rope, the rap went really weird (as I was partially just hanging on the prusik). Well…

The day was good, I started to find again some joy in climbing. I guess it’s still gonna take some time. The route itself is really nice climbing ! 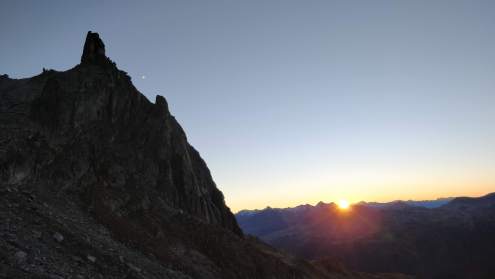