This climb was on my list since I moved to Switzerland in September 2015 and was looking for stuff to climb in Autumn. It seemed to be highly recommended classic. Then after being in Ticino in Ponte Brolla region (with Vladimir), walls did not strike me as awesome climbing, so it got lower on priority list.

Finally this weekend a cold front came and climbing in Furka or Grimsel would mean being cold again, I had enough of that. Together with Masha we decided to go to Ticino, as an only reasonable whether and temperatures.

Being warned that we should be possibly out of the wall before the sun hits we started early. We drove down Sat morning, went to sleep relatively early (with a caveat, that I have put up tent 30min after going to sleep 8 mosquito-bites in), woke up around 6, started climbing around 7.30.

The wall is NOT IMPRESSIVE AT ALL. It is basically filled with bushes and grass. It is quite surprising in visionary on how the route actually manages to avoid most of the grass and gets through the wall via really nice passages and really good climbing.

Climbing is quite good. The two best pitches are the two 6b in the upper part. Myself and Masha differ in which one is better, and we basically vote to the one each of us led :-).

It took us 6h35min, which I think it alright, we could probably cut another 20min on the belays, a few on being stuck on lead and quite a few at being less tired (how do you do that) on the upper part of the wall. Oh, yeah, and I forgot it’s 600m and 6b+.

Descent is again horrible. Make sure not to loose track at the beginning, basically do not go to much to the back. Topo says 50 or 150 meters up, but it’s easy to go too far. Did I mention I hate walk offs ?

We fished for a good pizza in Locarno, but it was impossible to get one before 6pm, which made Masha furiously angry :-). We managed to get really good pizza close to the airport on the way back though. (Thanks God, cause I would not like to be in a car with this hungry woman :D). 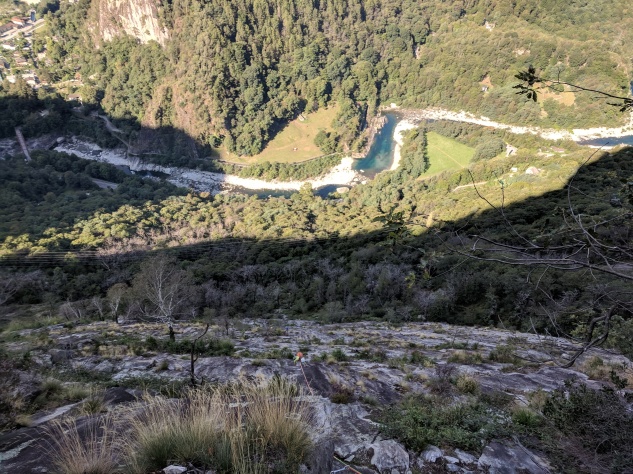 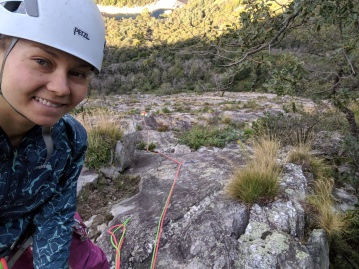 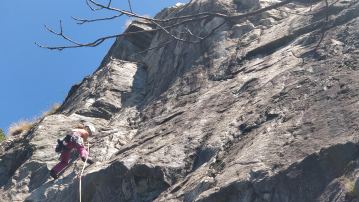