I agreed with Chmielciu to spend a week climbing in Chamonix over August. We settled dates – happy times. When it actually came to that dates I was really stoked to climb Freney, Maciek had no problems with that and we said we’ll start climbing on Tues when I get back from MB.

Fortunately for me Tues was rainy so, after being trashed on Freney, and coming down on Monday I actually had a day to rest :-).

Wednesday and Thursday were supposed to have good weather though rather cold. We were too lazy to walk all the way to Enverse, so we planned to go to Plan de l’Aiguille for two days of climbing. First surprise was that at 6.20am there is more people in front of the Aiguille du Midi cable car than midday in the center of Chamonix. With a bit of luck and we got a cable car around 7am – not bad. It was quite COLD, so we were not trying to be quick afterwards. Setup the tent waited for Maciek and Tomek, drank tea, and slowely moved to Blatiere.

When we arrived there was already a couple of parties on L’eau rance d’Arabie that we wanted to climb. The party in front of us bailed, but it still took them forever. We started climbing late, maybe around midday. Maciek gave a try to the first pitch, but got cold and slipped, asked me whether I wanna give it a try. Sure I did.

First pitch is a delicate 6c (imho it’s easier, but Maciek says it’s solid). I gave it a solid try, but my foot slipped while I was trying to warm up my hands. To be fair I should have just done 3 more moves and do that on a better ledge – well… there is a lot to play into how you’re moving. Afterwards the rest while COLD, was done clean. I would basically do it either later in the day in the sun, or on a warmer day. The following pitches are stunning climbing in cracks with some slab moves. The second crux of the route is another very friction based funky move, that I failed again – this time cause I changed shoes to much bigger TC pros – this was a mistake, after changing back to Miura’s I executed the move with no problems (ok, it was hard, but did it in a first go).

Further on there are still awesome cracks, interesting layback and one more slab (much easier) at the end. We rapped down without problems and went back to spend nice evening with wine, cheese etc and Maciek and Tomek, who climbed Old Wave. It is pretty cool to be in a remote place with luxury of a cable car, taking wine and good food, but still being able to enjoy remoteness, view over mountains, clear sky – great evening.

On Thursday…. well… we wanted to climb, but it was even colder, it did not stop Maciek and Tomek, but it did stop us. We spend lazy morning, took the cable car down, went crag climbing, but we did only 3 routes each as it got into the sun so it was way to hot (“zimno źle, gorąco źle, takim to nie dogodzisz”). Than spend some time at the lake cooking ginger nudels (Jan – your recipe is getting more and more people excited)

I spend an awesome evening with Maciek, Tomek, Gosia and Józek, talking climbing and other BS, sharing experiences and planning new adventures.

On Friday, setup to go back home. 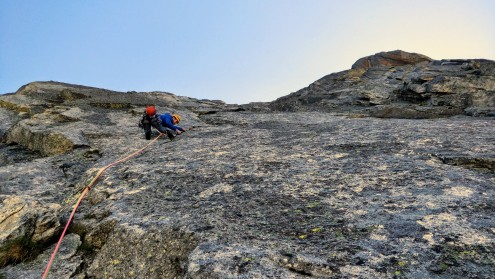 One thought on “A “week” in Chamonix”